Sutton’s superb FA Cup run has turned reserve goalkeeper and goalkeeping coach Wayne Shaw into something of a minor celebrity, with the big-boned stopper even receiving an offer to pose naked for a magazine. 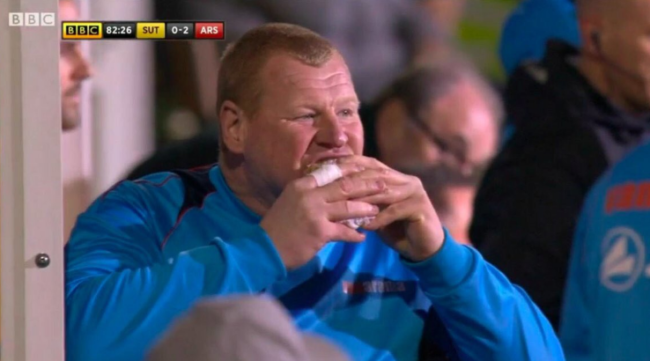 During Sutton’s fifth round clash with Arsenal on Monday night, the 20 stone 45-year-old decided to celebrate the glamorous evening by tucking into a pie on the subs bench, only once all three changes had already been made mind.

However, there may well have been more to Shaw’s pie-demolishing antics than meets the eye, with suspicions aroused over a Sun Bets offer earlier that day…

Well, if it all was pre-arranged then it’s a clever piece of marketing, albeit by a rather risible rag.

And we can’t see Arsene Wenger and his army of sports nutritionists introducing a mid-game pie back at the Emirates any time soon.