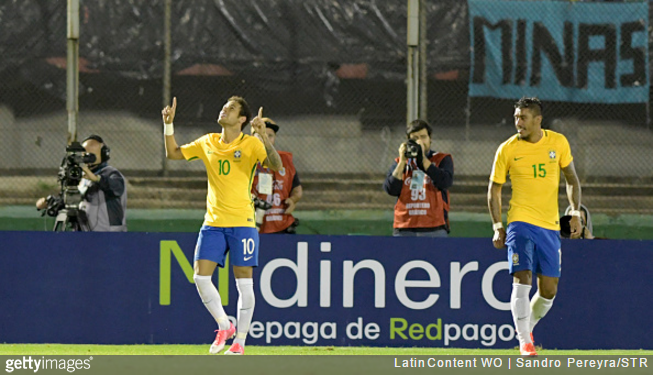 With both Lionel Messi and Cristiano Ronaldo entering the autumns of their respective careers, 25-year-old Neymar is surely destined to eventually take their places as the best player on the planet.

During Brazil’s World Cup qualifier away to Uruguay on Thursday night, the Barcelona star scored a peach of a goal while ex-Tottenham midfielder Paulinho bagged a cracking hat-trick.

Uruguay took the lead on nine minutes, with Edinson Cavani converting a spot-kick after he had been felled in the box by ‘keeper Alisson.

After the break, Paulinho, who currently plies his trade with Chinese side Guangzhou Evergrande, put Brazil ahead, netting from close-range after a Roberto Firmino shot had been parried by Martin Silva in the Uruguay goal.

On 74 minutes, Neymar finally got on the scoresheet, with the attacker producing an exquisite chip to put the visitors 3-1 up – his 68th goal in 98 appearances for the Selecao…

The win sees Tite’s side go seven points clear at the top of the South American table, with their place at the 2018 World Cup all but sealed.