Having spent the first few years of their existence playing in a flat corner of Stanley Park and at Anfield, Everton finally moved into their current stadium in 1892 when the club effectively split in two following a fractious dispute with club chairman and owner of Anfield, John Houlding, over repeated rent hikes among many, many other things.

Left with a stadium and no club, Houlding formed Liverpool and went on his merry way while the Toffees moved into Goodison, one of the world’s first purpose-built football grounds, and began their ascent 971 metres away on the opposite side of Stanley Park… 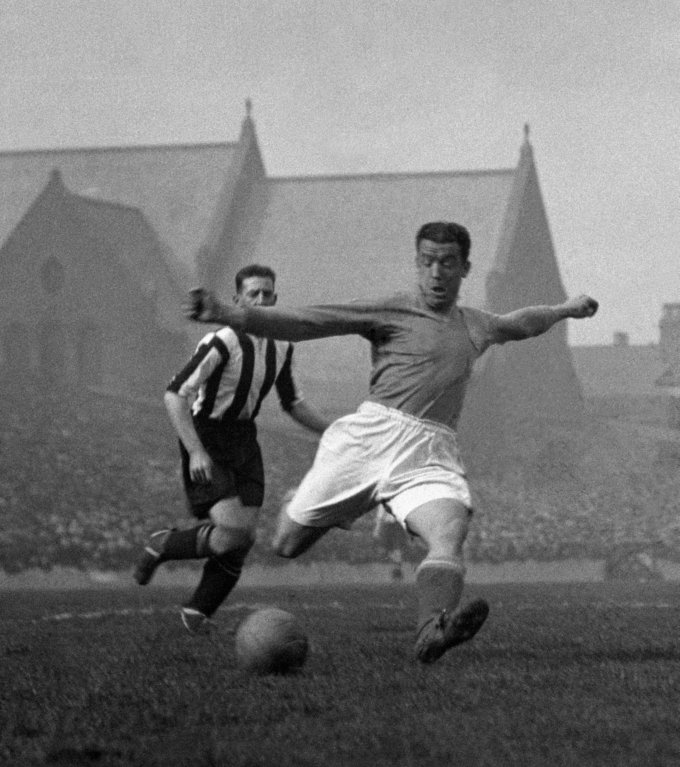 Dixie Dean, aged 23, scores yet another goal for Everton at Goodison, this time against Grimsby Town in 1930. Note the Church of St Luke the Evangelist sitting in the corner of the ground. 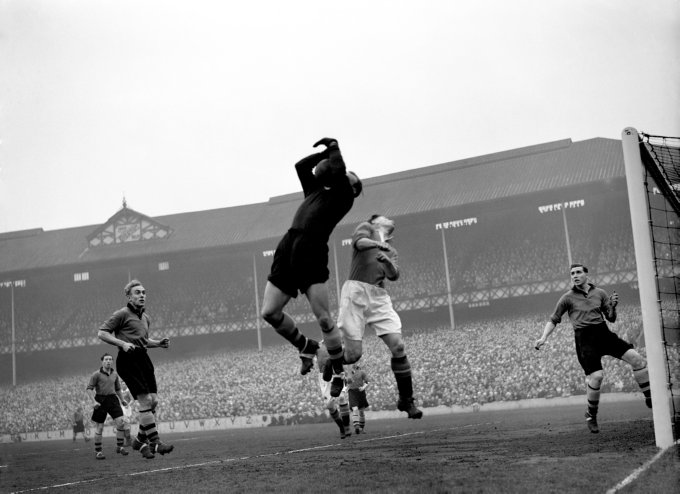 The Wolverhampton Wanderers goalkeeper comes to claim the ball as his side see off Manchester United by a single goal in the FA Cup Semi Final at Goodison, 1949 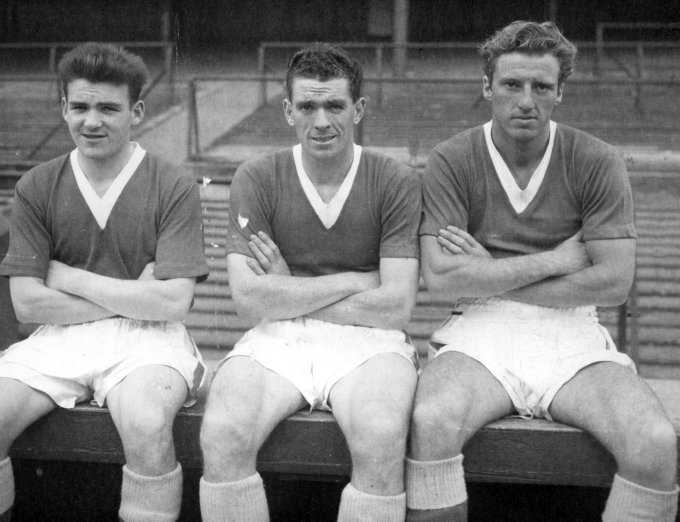 Everton players line up for a pre-season photocall at Goodison, 1957. In the middle there is Tony McNamara: the first player to appear in all four divisions of the Football League within 12 months (between 1957 and 1958 he played first for Everton in the First Division, then Liverpool in the Second, Crewe in the Fourth Division and finally Bury in the Third) 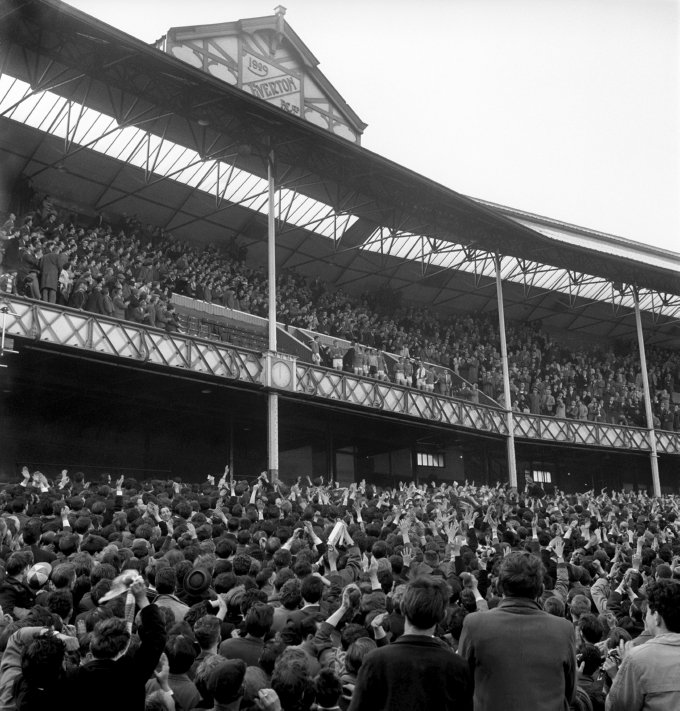 The Everton team appear in the directors box under the Goodison gable as fans flood to celebrate the Toffees’ Division One League title success, 1963 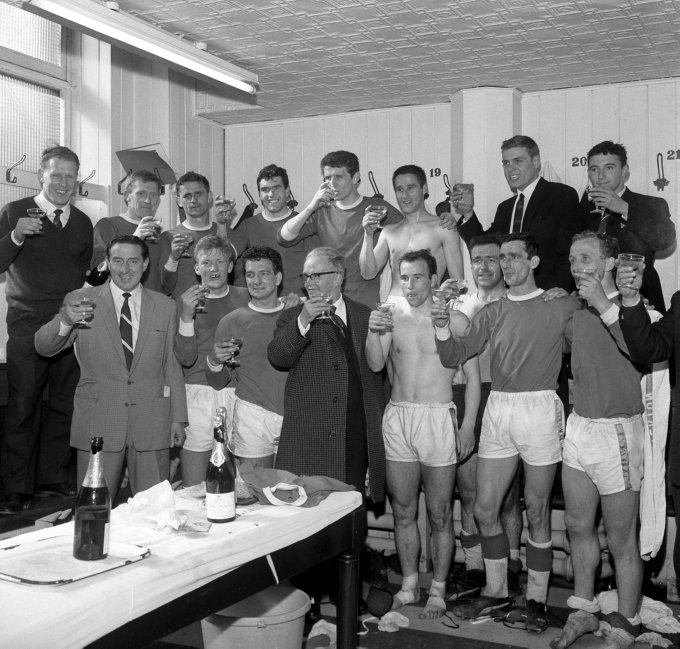 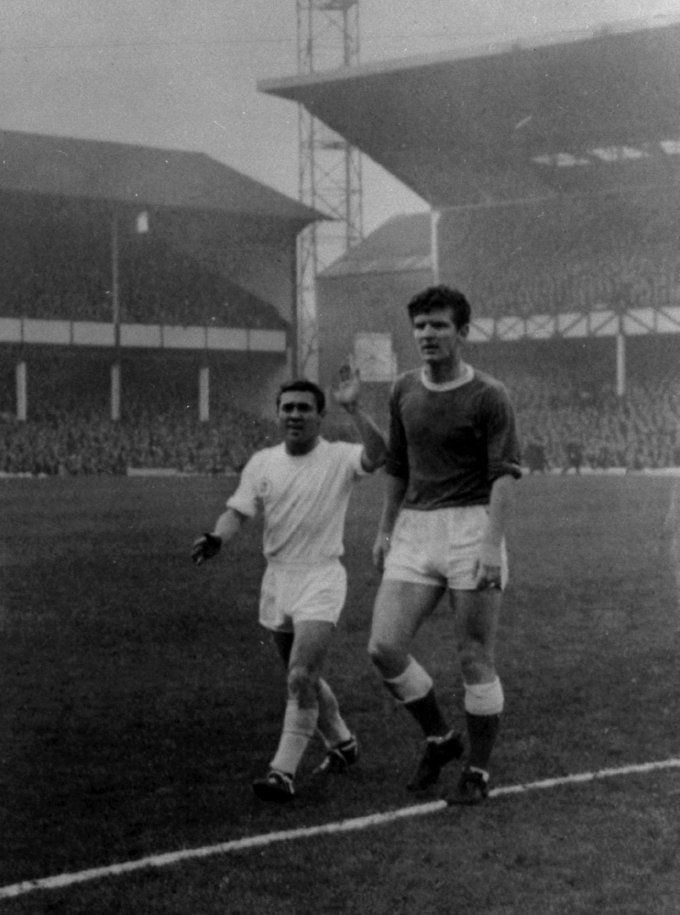 Either Leeds captain Bobby Collins was an extra in Willow or Everton captain Brian Labone is an eight-foot giant. Either way, this photo was taken at Goodison in 1964 shortly after the referee ordered all players off the field for a five-minute cooling-off period following a spate of rash tackles and unsporting conduct – the first and only time such a decision has been made in English league football 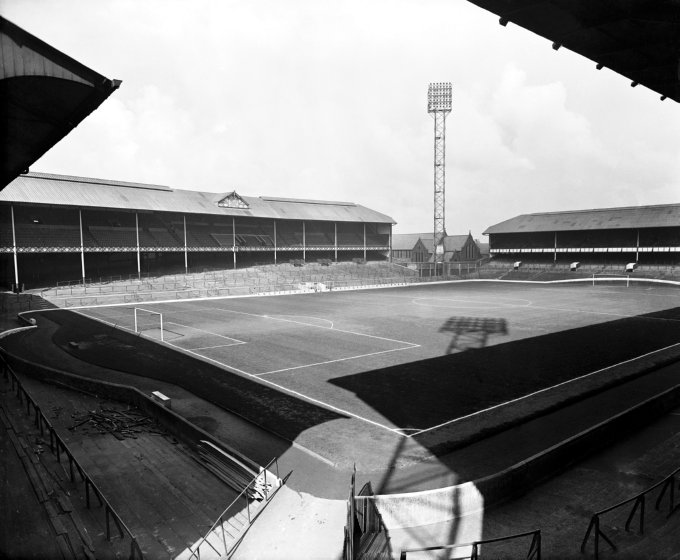 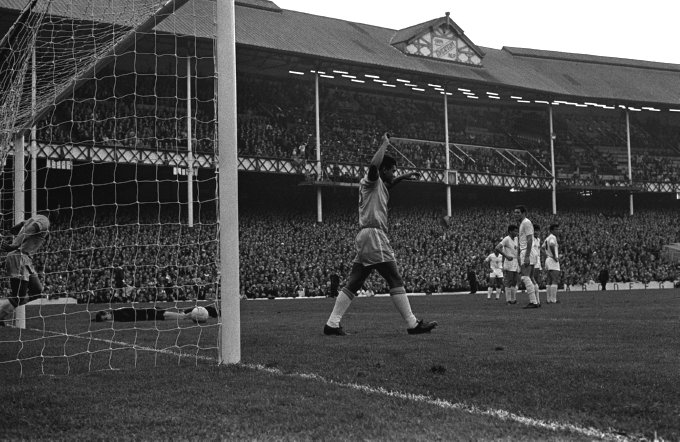 Brazil’s Alcindo celebrates as Bulgarian goalkeeper Georgi Naidenov lies flat out on the Goodison turf having been beaten by Garrincha’s freekick to make it 2-0, 1966 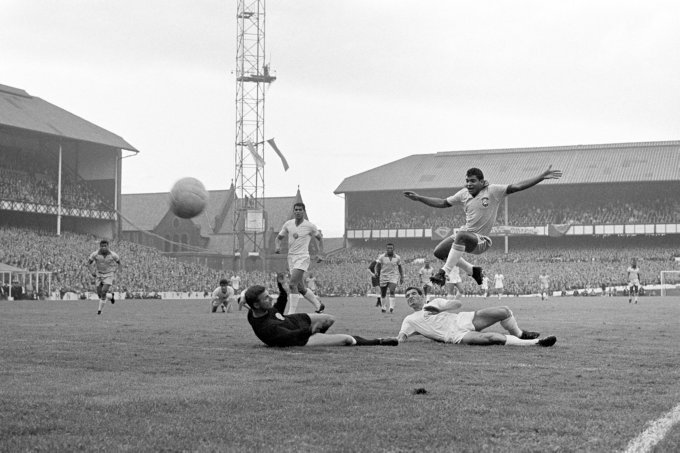 Brazil’s Alcindo lashes the ball wide as Bulgaria goalkeeper Georgi Naidenov blocks his route to goal in front of a sell-out crowd at Goodison, 1966 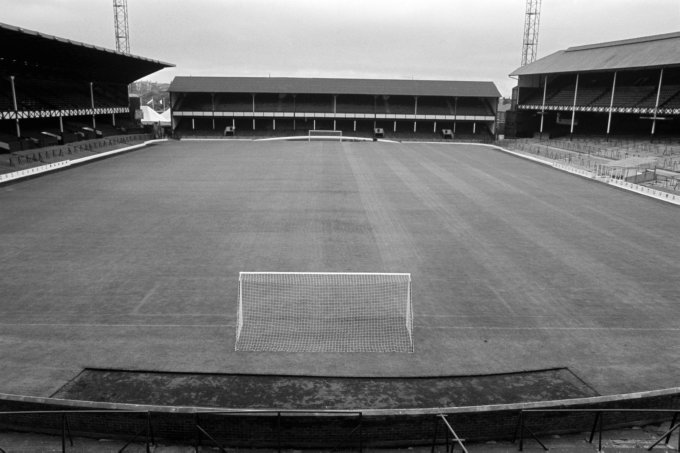 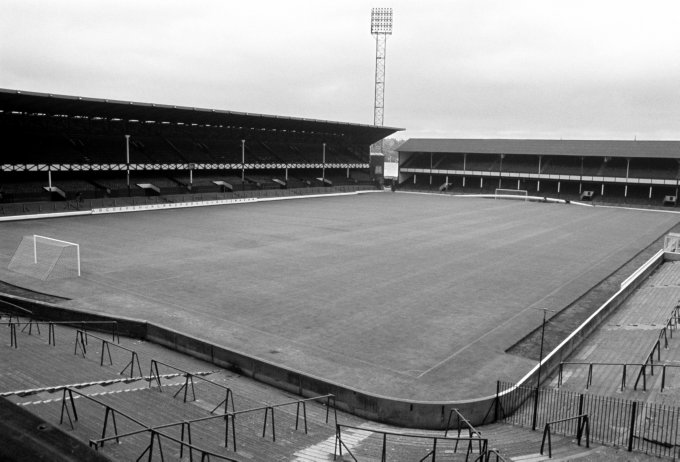 Goodison Park in ’66, as seen looking from the Park End south toward the Gwladys Street Stand 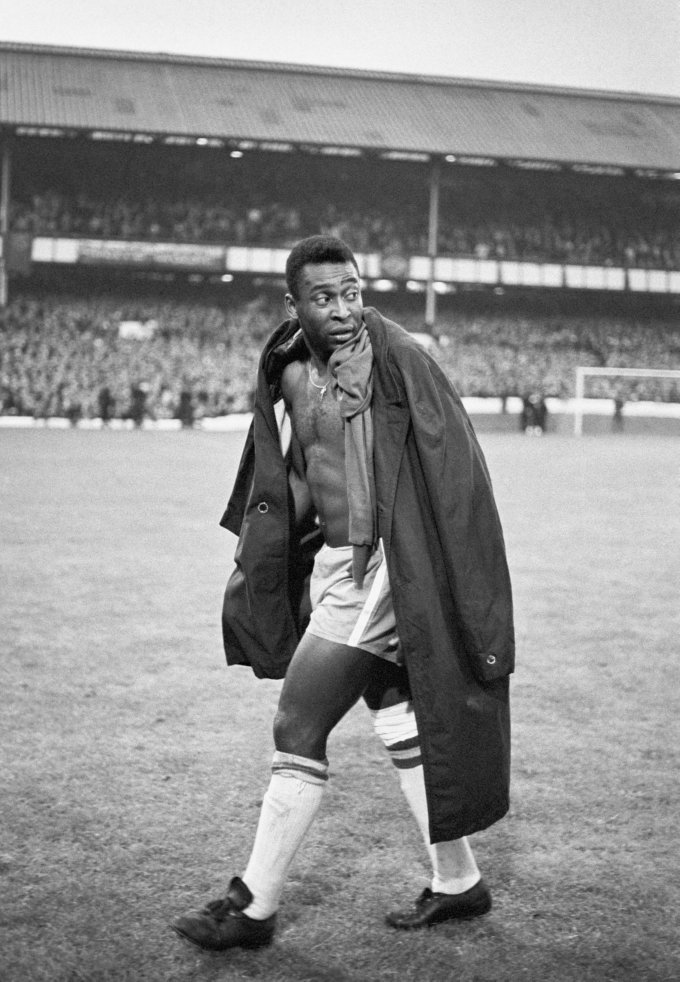 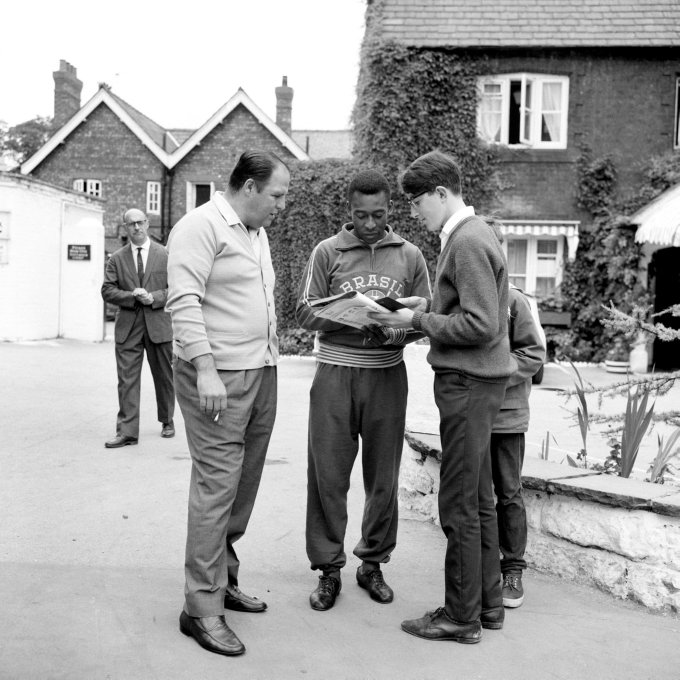 Crocked and unavailable for selection, Pele stops to sign autographs for young fans in the street outside Goodison before Brazil’s game against Hungary, 1966. The man looking on sternly in the background is Pele’s personal doctor, Hilton Gosling 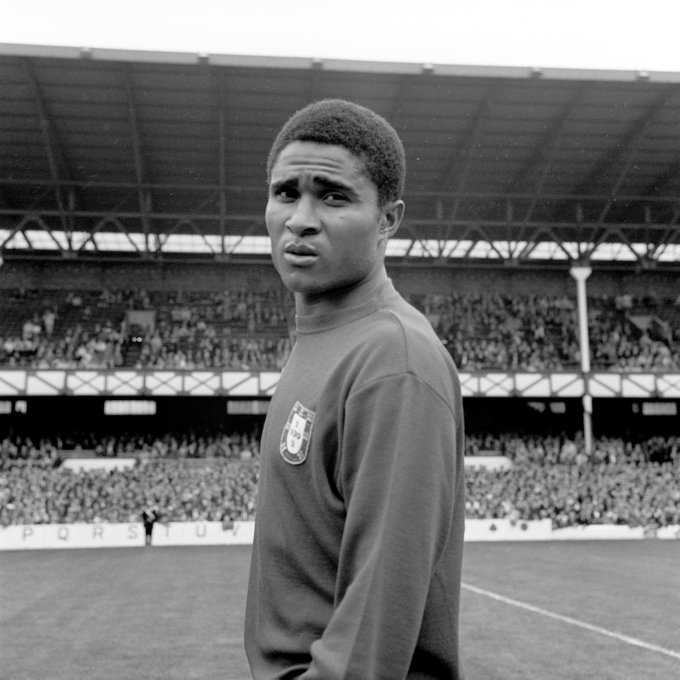 Eusebio graces the pitch at Goodison, 1966 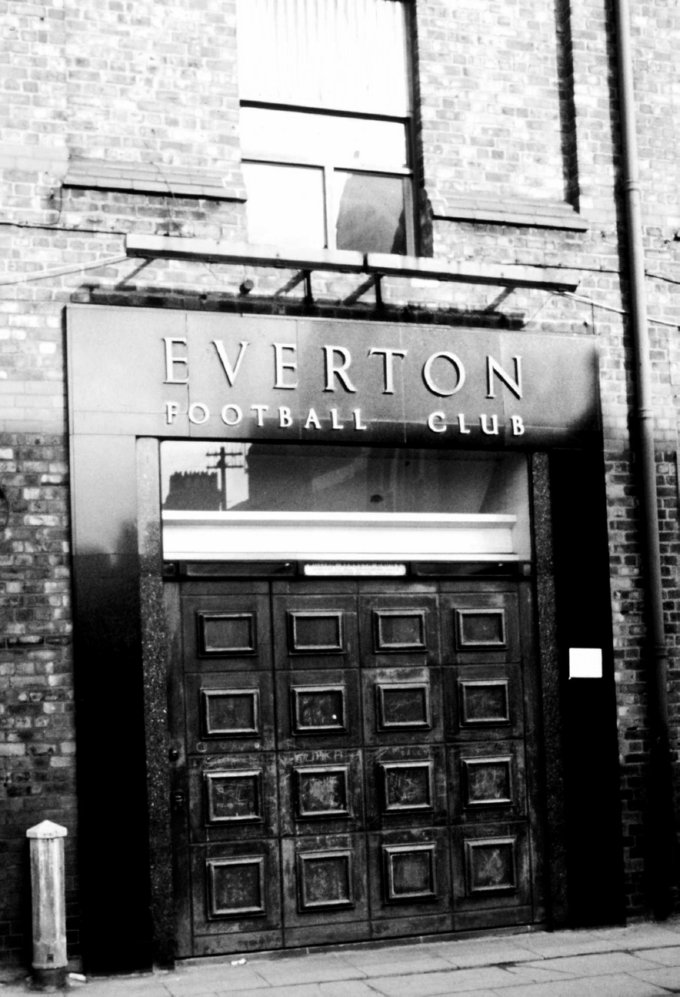 The stately front doors to Goodison Park, seen here in 1968 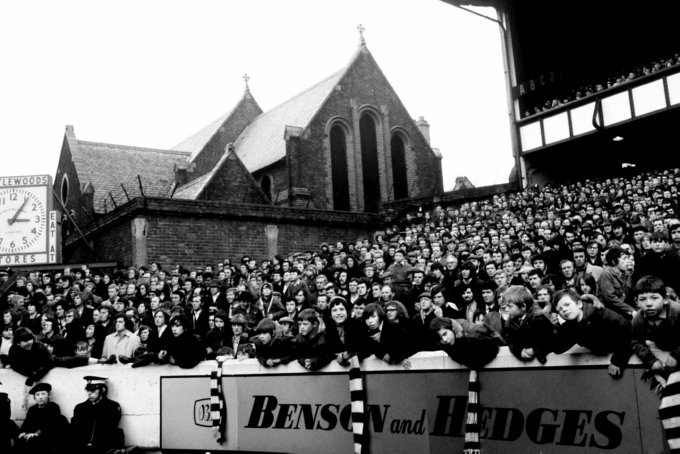 Everton fans cheer in the corner of the Gladwys Street End as the Church of St Luke the Evangelist protrudes into the picture, 1968. Everton have long agreed not to play early kick-offs on Sundays to allow Sunday Service to be held in peace.

Side by side: Goodison Park (on the left) and Anfield (right) sitting on opposite sides of Stanley Park (photo taken in 2006 and sneakily monochromed for effect!)