It has been announced that Wigan Athletic are to pay tribute to long-serving player, chairman and owner Dave Whelan by building a life-size statue of him outside their DW Stadium.

The 78-year-old businessman is also to be anointed “honorary life president” of Wigan Athletic as a mark of his “enduring legacy to the town” and as a “fitting tribute to the man who presided over the transformation of the club”.

While his 20-year reign as chairman ended slightly acrimoniously a few months ago – Whelan first controversially hired Malky Mackay as Wigan manager despite the Scot being in the midst of a racism scandal before then going on to say some very unfortunate, grandad-ish things about both Jewish and Chinese people himself – there can be little doubt as to the man’s influence on the football club over the years.

Having retired from football early after breaking his leg in the 1960 FA Cup Final, Whelan earned his fortune as the of JJB Sports before returning to Wigan in 1995 and subsequently ploughing millions of pounds of his own money into the club as he transformed them from Fourth Division also-rans to a Premier League side, winning the 2013 FA Cup into the bargain – the single finest moment of his tenure.

Whelan, who is still the Latics’ owner, then stepped down as chairman at the beginning of March and duly passed the duties onto his 23-year-old grandson David Sharpe.

“What my grandfather achieved at Wigan Athletic is beyond the dreams of anyone connected with the club and I feel it is fitting to honour those achievements, firstly with the title of life president and secondly with a statue which we are planning to erect outside the main entrance of the DW Stadium.

“My grandfather transformed the club forever and I know that every Wigan Athletic supporter appreciates the things he has done for us and will support both of these ideas. Dave Whelan’s achievements at Wigan Athletic deserve to be immortalised.”

Fun fact: Did you know Whelan broke his leg in the 1960 FA Cup Fina…oh, you already know.

Anyway, don’t ask us how but Pies have managed to get our hands on a leaked picture of the first mock-up model of Whelan’s statue. Here it is… 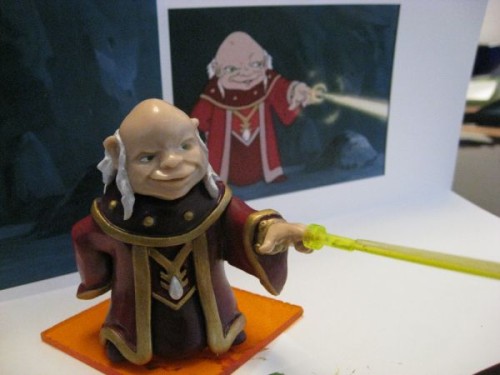