Alas, I fear that my humble entry in Pies’ ‘favourite kit’ series isn’t going to stir the same kind of emotions within the souls of the public at large that many of the previous nominations have managed to do, being – as it is – an altogether more personally significant choice. 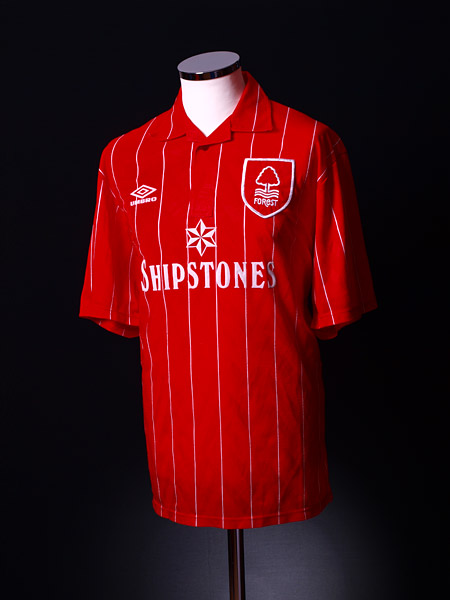 I could put this particular strip forward for simply aesthetic reasons. The timeless elegance of the styling means that it’s still a favourite with many-a-Forest fan today – and as for that colour, I don’t think I’ve ever seen the famous Garibaldi rendered quite so richly.

Umbro’s 1992-94 effort is weighted with a lot of historic significance as far as the club goes.

It’s the shirt we wore during our ill-fated outing in the inaugural season of the Premier League, it’s the shirt that Roy Keane sported briefly before moving on to bigger and better things, it’s the shirt in which we won the last ever Zenith Data Systems Cup (an additional domestic competition created after English clubs were banned from Europe following the Heysel disaster) and, of course, it’s the shirt that Forest had on their backs when Brian Clough‘s raging alcoholism finally got the better of him.

At the end of the 1992/93 season, Forest were unceremoniously relegated from the top-flight after sitting on the bottom for the majority of the campaign, and Cloughie – increasingly incapable of cognitive thought – decided that his 18th year at the helm was going to be his last. 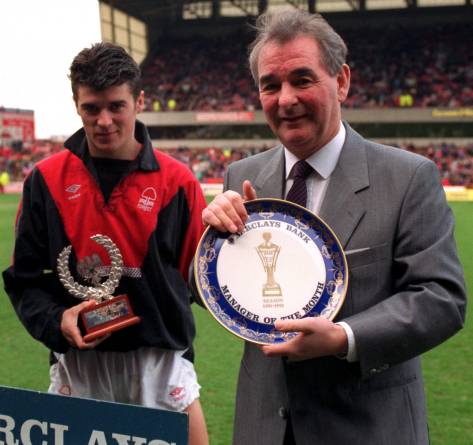 Roy Keane and Brian Clough at the City Ground in 1992

Personally speaking, the strip has a little deeper significance – more than just the aforementioned blips on Forest’s fading timeline that it came to oversee. The 1992-94 shirt above is the shirt that was current when, at the age of nine or ten, I first began to feel my supporter’s allegiances indefinitely shifting toward the City Ground.

With no direct and unquestionable club loyalties to inherit from my father, I grew up as somewhat of a ‘stray’ in terms of footballing piety. Like nearly all of my school friends, I had always played the game, but unlike the majority of them, when it came to the professional game I had what can only be described as a passing interest at best (under questioning, I always maintained that I was a devout Forest fan – mainly to avoid any nasty playground repercussions).

However, as the top flight of English football began it’s meteoric rise in popularity – and, as a result, I gradually became more and more exposed to the game on an almost daily basis – I began to feel the pull – the real, tangible, uncoaxed pull that I’d secretly yearned for for so long, and steadily the seed of the Major Oak began to germinate in my psyche.

I’ve been a dedicated ‘Tree’ ever since.