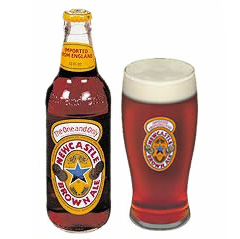 Yesterday a lot of you had great fun thinking up a name for Tottenham’s new stadium.

Today it’s the turn of Newcastle United, a club which attracts even more ridicule than Spurs. Owner Mike Ashley – a sort of real-life Peter Griffin – has not only taken the club off the market, he’s announced that the club will be “welcoming offers for the stadium naming rights next season”.

Really? I’d understand if Newcastle were planning to move into a new stadium, but to rename St James’ Park… poor Bobby Robson must be spinning around already.

Anyway, money talks etc. and Newcastle will do whatever it takes to get back into the Prem, even if that means selling out – they wouldn’t be the first club to sell out either.

So… time for you lot to think of a suitably amusing name for the all-new St James’.

My suggestion: The Newcastle Brown King Kevin Keegan Palace of Shattered Dreams. It has a ring to it, no?

Oh, by the way, a few of my favourite names you suggested for Tottenham’s new Lane:

The Chicken Cottage Cauldron (‘B’)

In seriousness, The Mansion isn’t so bad. In jest, I bow to Austingunner’s effort.