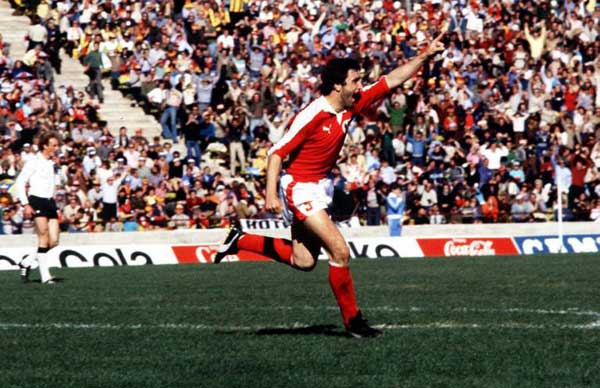 With the game itself still referred to by Austrian football fans of a certain vintage as “The Miracle of Cordoba”, it was striker Hans Krankl’s stunning volley that gave Austria their first international victory over rivals West Germany for 47 years – and it just so happened to come in the second round of the 1978 World Cup in Argentina.

With Austria having lost their previous two games in the second stage (including an embarrassing 5-1 panning by eventual finalists Holland), Austria came from a goal down to go 2-1 up over West Germany on the hour-mark before a 72nd-minute equaliser from Bernd Hölzenbein deflated them once again by restoring parity with quarter-of-an-hour or so left to play.

Then, in the 88th minute, Frankl – who had just joined Barcelona after winning the European Golden Boot with Rapid Vienna – painted his masterpiece, which was accompanied by a side-clump of equally legendary commentary…

Krankl was and is widely regarded as the very finest player Austria have ever produced, ending his first season at Barca as La Liga’s top goalscorer before returning to Rapid in 1981 and winning two further league titles before finally retiring, only to return to the Gerhard Hanappi Stadion once again as manager in 1989.